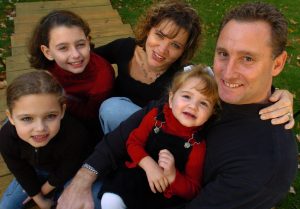 Cameron and the Diamond Family 5

Cameron Kennedy Diamond was born April 17, 2000 to BJ and Carol Diamond. Like her sisters, Amanda and Julia, she was perfect; beautiful with her Mom’s dark hair and eyes and her Dad’s great smile.

Now, it’s said that the third child is the strong child. The third child has to always fight harder for its place in the world. Carol and BJ both found themselves as the third child in their families. And both became strong, solid, smart and very funny…they had to be.

But despite their awareness of the third child syndrome and the built-in challenges that come with that position, Cameron’s parents have been completely awed by the strength their third child would prove to have.

The Tuesday morning after Memorial Day in 2000, Cam work up with a very slight fever, but a fever nonetheless. She was just six weeks old. That morning when Carol took Cam to her pediatrician Dr. Gilliard in Crofton, he found no discernable cause for the fever but instead of dismissing it as nothing, prescribing Tylenol and sending them home, Dr. Gilliard sent Carol and Cameron to an Annapolis Hospital for further tests. He wanted to know why Cameron had a fever with no attributable symptoms.

That evening they were transported to the University of Maryland Medical Center in Baltimore and within 24-hours the doctors were able to diagnose the cause of Cameron’s fever. She had leukemia. Although considered treatable, her young age and her tiny size made Cam’s chances of surviving the treatment less than 10%.

The rest of that summer proved challenging as she initially spent weeks at the hospital and even once released had frequent stays. During that time, Cameron underwent intense chemotherapy, radiation, and in November underwent a Bone Marrow Transplant at Johns Hopkins. There were many very bad days, but, to the amazement everyone including her doctors, that little kid kept bouncing back from any and all setbacks.

The years that followed saw her face challenges related to what her little body endured that first year. We began giving her daily growth hormone shots to help her grow; she was prescribed a medicine that strengthened her heart whose function was on the lower end; and she took a pill that helped her thyroid perform properly. Those three prescriptions are still given to this day. But Cam survived like the brave little champion she is.

In June 2005, we celebrated with a “Cam’s Cured” party. All family and friends were present, including her donor, Greg Young and his family from Alabama. We have come to know the Young’s and appreciate even more the wonderful people they are.

Unfortunately, two weeks after that magnificent celebration, Cam developed a cough that grew into bronchitis and eventually pneumonia. Over the next 10 months these respiratory episodes reoccurred and she was diagnosed with asthma.

In May 2006, after a small yet persistent cough would not go away, we asked for her doctors to perform any tests necessary to tell us what was going on – we were convinced this was more than asthma.

That spring and summer we went through an intense investigative process.

Through a lung bronchoscopy and a lung biopsy, the doctors were able to determine she has an interstitial lung disease. We also decided to address why she was not a good eater. The cause was due to the lung disease in combination with a newly discovered hietal hernia. So a feeding tube was surgically implanted. By the end of July, we were able to give her feedings while she slept and were treating the lung disease with steroids. Not only did she gain weight but all indications were that the lungs were responding to the steroids.

But nothing is easy…the steroids coupled with the supplemental feedings and growth hormones sent her body into a Type 2 Diabetic reaction. Through discontinuing the hormones, insulin injections, and tapering down and off of the steroids, the diabetes went away.

Since the steroids created complications, we began looking for other anti-inflammatory medicines to address her lung condition. It would also allow us to continue her feedings and growth hormones. Unfortunately, we haven’t been too successful and are on our third drug in hopes it will improve if not cure her lungs.

In May 2007 (can everyone see why we are not big fans of the month of May) Cam battled yet another bout of pneumonia. She again recovered. Cam attended First Grade at Crofton Woods Elementary School in the Fall of 2007. She became ill in January of 2008. Cam received incredible care at JHU. She made an incredible journey in early April 2008 to St. Louis Children’s Hospital via medical transport touching many more lives. Cami celebrated her 8th birthday with her family while in St. Louis. Family and friends rallied to provide the entire family with the support necessary to sustain two separate residences.

“It is with broken hearts that we have to share the news that Cameron left us at 8:30 this morning. Clinically she had been dealing with multi organ failure, but it seems heart just wasn’t able to maintain the proper blood pressures. In meeting with a team of docs yesterday, we had decided that was one of the last and key indicators that her body could not sustain the fight. She passed away in Carol’s arm with Mandi, Julia, and myself at her side. There was no pain and it happened quickly. The SLCH staff were great to give us the respect, time, and space we needed. We were able to each hold her, kiss her, tell her how much we love her, and that we’ll always be the Diamond Family 5 (4 in the flesh and 1 angel). We have comfort knowing she is no longer fighting or suffering in any way. While at times be we’ll feel sad, hurt, mad, cheated, blessed, and most every other emotion you can imagine…but I ask for a couple specific requests… NO PITY – everyone (us, you and the docs) did everything we could to fix/cure Cami. Yes this was hard and will continue to be difficult…but we still need your love and support. We have, are, and will be a strong family. CONTINUE CAM POWER – that spirit helped us, and I pray it can and will help others. Please continue to wear the bracelets and shirts with pride. It shouldn’t make us or anyone else sad because she just happens to be spreading CAM POWER in heaven, Further, I urge everyone to be proud to know they were part of something special and that brought such strength, love, and spirit to people all over the country. CAM POWER FOREVER. We will be provide details related to the funeral arrangements as soon as we know. But once again, please know each any every one of you supporting us through this difficult time (was once termed an adventure) are appreciated and cherished from the bottom of our hearts”

We hope you find inspiration to use or share her example of strength and spirit in your life or to share it with someone you care about. A young doctor told us on the day she was diagnosed with leukemia, “You have to have hope, kids can do amazing things”. Cameron proved him right.

Thank you for all of your support, prayers, and love.